Announced by Microsoft at the CES Keynote in Las Vegas, an. HP Consumer Notebook Slate.

Back in the autumn of 2007, Asus launched their Asus EeePC. I managed to get my hands on one in February; a small form factor PC running Xandros (Linux) with a 7″ screen.

There had been small laptops before, but they were usually around £2000, the Asus EeePC was less than £200!

Before long, lots of other companies had jumped on the bandwagon, Dell, HP, even Sony started offering a cheap netbook. Notably Apple didn’t!

In November 2008 we recorded a podcast on the impact of the Asus EeePC and other netbooks; this was at the height of their popularity.

However it wasn’t long before the honeymoon was over. Only in March I was writing about some of the issues I had had with the very small netbooks.

Though I liked the Asus EeePC the keyboard was rather too small for me and I know others found it difficult to type large amounts of text on it. The HP 2133 was well suited to those who found the smaller micro-laptops too much of a microscopic size.

It was also back then we started to see the feature creep and added functionality with newer netbooks, in the same blog post I wrote.

However no point in recommending the HP 2133 as HP have decided to withdraw that model. Their replacement, the HP 2140 has a similar form factor to the 2133, included the nice keyboard, but now has a10.1″ screen. You have to ask is it a micro-laptop or is really no longer that form factor and more a subnotebook now?

We also started to see rising prices too. But the devices were popular with learners and practitioners. At most e-learning events too they were awash with netbooks.

However here we are two years after the launch of the Asus EeePC and the netbook is effectively dead, or will be dead soon!

The BBC reports that:

Rising prices and better alternatives may mean curtains for netbooks.

The small portable computers were popular in 2009, but some industry watchers are convinced that their popularity is already waning.

“The days of the netbook are over,” said Stuart Miles, founder and editor of technology blog Pocket Lint.

There are now no netbooks with 7″ screens, very few with 8.9″ screens, most are now coming with bigger screens, at least 10.1″ and sometimes larger. The original netbooks came with small flash based drives, often 2, 4 or 8 GB. This was fine for browsing or word processing, but not sufficient for video or audio. So manufacturers started putting in large traditional hard drives. HP pulled Linux from their netbooks back in February, and that was down to consumer demand, consumers wanted Windows and couldn’t handle or like the Linux OS. In my experience, though I did like Xandros, I found the SUSE on the HP netbooks difficult to use and (bizarrely) unreliable. One of the big issues with the netbook was that it was underpowered which meant it was unsuitable for internet video; as a result manufacturers started putting in more memory and more powerful chips.

The netbook as envisgaed by Asus and imitated by others, is now effectively dead. Most netbooks you buy now are effectively normal laptops, maybe a little smaller…

So what does this mean for learners and learning?

A fair few learners did buy netbooks, but many more bought traditional laptops, as they preferred the “better” user experience over the netbook. Netbooks for most users were as a second computer; learners were more likely to have a single computer and needed something more powerful. Netbooks often did not have the power to deal with media-rich learning content. However the death of the netbook means that there is not the choice that learners did have.

Newer technologies can result in more choice. For a lot of people I know the iPhone has replaced their netbook, and with the introduction of a large iPhone-esque Tablet device by both Apple and Microsoft in 2010 we may have a new style of netbook, a tabletnetbook!

One of the things I have always liked about the Asus EeePC is the Xandros interface.

The simple icons and easy access to the web and applications, mean that users who aren’t use to Linux can start using the EeePC without worry.

Having recently used the Suse desktop on the HP 2133 it was fine but not as simple to use as Xandros. Sometimes I think it would be nice to have the Xandros interface on devices such as the HP 2133, Samsung Q1, etc…

Saw on Twitter recently a link to Jolicloud which is a new OS for netbooks. 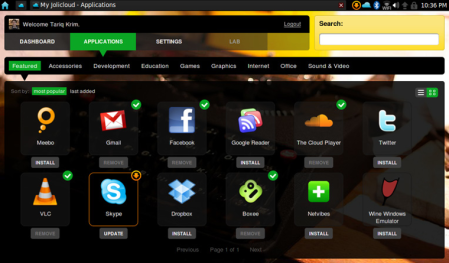 Alas it is invite only at the moment, so I have signed up and am chasing down an invite code.

I want to install it on an Asus EeePC and a Samsung Q1. The Q1 is not yet supported, but could be a more useful OS than Vista!

One of the nice things about my job and working on the MoLeNET programme is the fact that I can try out new pieces of equipment and wonder about their impact on our learners and learning.

I have written (and spoken) about the new breed of micro-laptops that surfaced last year starting wirth the Asus EeePC. Since then the number and type of micro-laptops have blossomed. So much so that the original 7″ Asus EeePC is now no longer available. Asus have improved upon their original concept and others have copied them. The Asus 901 for example has the same form factor as the first model, but now has a 8.9″ screen which does make a difference in how usable it is.

One micro-laptop which I did like was the HP 2133 which came with the bigger 8.9″ screen and importantly a 90% size keyboard. Though I liked the Asus EeePC the keybvoard was rather too small for me and I know others found it difficult to type large amounts of text on it. The HP 2133 was well suited to those who found the smaller micro-laptops too much of a microscopic size. However no point in recommending the HP 2133 as HP have decided to withdraw that model. Their replacement, the HP 2140 has a similar form factor to the 2133, included the nice keyboard, but now has a10.1″ screen. You have to ask is it a micro-laptop or is really no longer that form factor and more a subnotebook now?

One factor common to both of these was the linux operating system used instead of Windows. The Xandros on the Asus is very easy and simple to use, whilst the Suse Desktop OS used on the HP 2133 allowed more flexibiloity in installing software, not impossible on the Asus, just easier.

More recently I have been using a totallt different type of micro-laptop, the Sony VAIO P Series. In many ways this couldn’t be more different. It runs WIndows Vista. It has an 8″ (20.3cm) widescreen screen with a 1600×768 screen resolution. One aspect I do like about it is that it has a Apple’esque nearly full size keyboard which works for typiing for me. This blog entry for example was written on it. 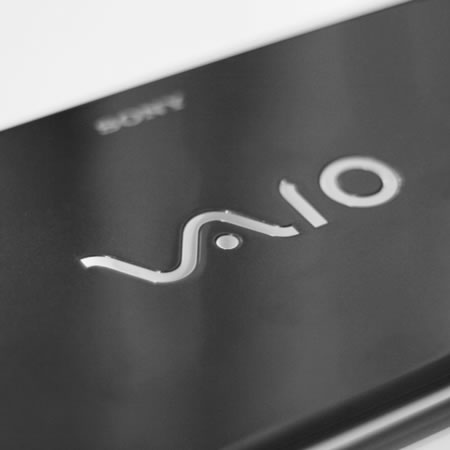 As well as wireless and Bluetooth it also supports HDSPA. remove the battery insert your 3G SIM card and using a simple application, adjust the setrtings use the VAIO with a 3G connection without having to worry about plugging in a dongle or tethering to a phone as a modem.

It also looks like Sony have been listening to their customers and as well as a Memory Stick slot the VAIO also has a SD card slot. Considering how much use I now make of SD cards with cameras, mp3 recorders and sharing files, the SD card slot is very welcome.

The one thing which everyone comments on is the size and weight, it weighs very little and is only 24.5 by 12 cm.

Such a small device has to make compromises and the screen resolution and size means that some people may have difficulty with the Vista interface.

Battery life is pretty good and you can purchase an extended battery which will last twice as long. I am currently getting about 2 hours out of the standard battery.

So why wouldn’t everyone get one?

Well the price of course!

The P series is about £850 though you can spend more and get the model with the SSD drive. So for the price of one P series you could get three Auss EeePCs.

The Register reports on HP’s pulling of Linux from all new netbooks.

It emerged today that the company will not now be bringing its Mini 1000 netbook to the UK – at least not with Linux on board.

I liked the HP 2133 model and have ordered one to show MoLeNET projects (and my college) the potential of such netbooks in enhancing and enriching learning.

Our experience with the Asus EeePC showed that the fast boot time and reliability of Linux on underpowered netbooks was a real advantage over Windows.

Are the new HP netbooks really fast then?

Engadget has a nice feature on the growth of Linux based UMPCs.

ASUS set the pace with Xandros on the Eee PC, and HP has tapped Novel SuSE Linux for the 2133 Mini-Note, but whereas the Eee’s positioning has been somewhat of a loose hybrid between an adult OLPC and the Nintendo Wii’s culture of global inclusion, the HP Mini-Note has been strongly focused on reckless, immature students while acknowledging potential for senior executives that have been known to share their temperament.

It’s interesting to see how this product niche has almost appeared from nowhere and is growing rapidly.

It seems to be a product that appeals to people who already own a computer, but want a laptop (and a small laptop at that) to complement it. The advantage of these little Linux laptops as well as the small size is the small price.

I have already seen quite a few of these laptops in college, brought in by learners, so I am expecting to see more of them.