So what is your digital footprint? Where can others find you online? What can you do about other people who post stuff about you on services such as Facebook, Google+ and the Twitter. Are you CMALTed? How many apps do you have on your iPhone?

With Zak Mensah and James Clay.

This is the seventy eighth e-Learning Stuff Podcast, My Digital Footprint.

Download the podcast in mp3 format: My Digital Footprint 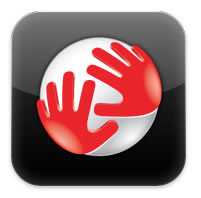 This is a regular feature of the blog looking at the various iPhone Apps available. Some of the apps will be useful for those involved in learning technologies, others will be useful in improving the way in which you work, whilst a few will be just plain fun! Some will be free, others will cost a little and one or two will be what some will think is quite expensive. Though called iPhone App of the Week, most of these apps will also work on the iPod touch.

So you need to know where to go?

You need to know how long it will take?

You need to be able to find an alternative route just in case?

Then the TomTom App could be the perfect app for you…

Okay this is one of the most expensive Apps in the iTunes Store and if you already have a TomTom or GPS then you certainly won’t want to buy this. However if you are looking to get a SatNav then getting one for your iPhone is certainly a real possibility.

Now to use this in the car you either need to get a car charger or the TomTom iPhone Car Kit. Now this adds another expense to the cost.

This is not a cheap SatNav, you can get much cheaper standalone SatNav devices from other places. However if you prefer to carry only one device (or not too many devices) then having a SatNav on your iPhone can make a lot of sense. The TomTom App also works as a pedestrian SatNav (ie when walking around).

The iPhone already has the GPS chip, however in order to make best use of the TomTom App then you really need the 3GS model with the digital compass. You can use the TomTom App on the 3G model however when you are in urban areas with lots of turns it doesn’t really work as you would like it to.

So why not just use the Maps App that comes with the iPhone? Well though the App can use the GPS chip, and can be used for directions, it doesn’t have turn by turn directions that the TomTom can. Though the main reason you don’t want to be using the Maps App is that the maps are not held locally and need to be downloaded from a server. This is fine if you have a good fast 3G connection, less so if you are in a rural area. The Maps App also only works properly when you are connected to a phone network. I found that out when I was in New Zealand recently. I had turned on Airplane Mode on the iPhone and was using the wifi and when using the Maps App the iPhone decided that I was in Kobe Airport in Japan, even though I was in Auckland. When I switched the phone mode on, it then found me accurately in Auckland. It should be said of course that the TomTom would not work in New Zealand either as I only have the UK & Ireland version. Though the TomTom New Zealand App is available.

GPS and location services offer many possibilities for learning, though a SatNav App may not be as useful as other Apps which make use of the GPS chip in the iPhone.

The key question about the TomTom is, does it get you to where you need to by the time you need to, then yes it does. Is it value for money, no it’s not the cheapest option and for a lot of people a dedicated SatNav is probably a better option. Does it offer much for learners? No not really.