Reading Maren Deepwell’s recent post about her #altc journey, it reminded me of the many conferences I have attended and like her the impact that they had on my life and professional practice. Going back to my experiences of my first ALT-C I was surprised I even went again!

END_OF_DOCUMENT_TOKEN_TO_BE_REPLACED

Reading Maren Deepwell’s recent post about her #altc journey, it reminded me of the many conferences I have attended and like her the impact that they had on my life and professional practice. Going back to my experiences of my first ALT-C I was surprised I even went again!

END_OF_DOCUMENT_TOKEN_TO_BE_REPLACED

Overall from my experience, Twitter has really added value to conferences I have attended and made them more joined up and much more a social affair. It has helped to build a real community, especially at ALT-C.

I first went to ALT-C 2003 in Sheffield and to be honest found it quite a souless affair. I didn’t know many people and it was “quite hard” to get to know people without dropping into conversations over coffee, which can be challenging Though there were elements of the conference that were useful and interesting, I decided not to attend ALT-C 2004 even though it was in my own backyard in Exeter.

I did go to Manchester for ALT-C 2005 as we had just done a project for JISC called Fair Enough.

As a result we had a poster and I ran a workshop entitled Copyright Solutions. The workshop was a catalyst for social interaction and as a result I made a fair few new friends. Also having been part of a JISC project and attended programme meetings, events and conferences the circle of people I knew was growing. ALT-C was becoming not just a positive learning experience, but was also becoming a positive social experience too.

Having had a really positive experience of ALT-C I decided I would go to Edinburgh for ALT-C 2006, where I ran a variation of the copyright workshop again and had another poster.

This time, there was an ALT-C Wiki, which sadly due to the demise of jot.com no longer exists. What I do recall of the wiki was that it would allow presenters and delegates to post presentations and discuss them. What was sad was how little it was used by anyone… no one wanted it. With over six hundred delegates only six people contributed. I did put this down to the 1% rule initially. I was also one of the few people blogging the event as well (on my old WCC blog). I was surprised with the fact (and maybe I shouldn’t have been) that six hundred learning technologists were not using the very technology they were presenting on.

However in 2007, things were very different, again not huge numbers, but certainly very different to the year before. ALT-C 2007 in Nottingham was a real sea change for the online interaction and was for me and others the year that blogging changed the way in which we engaged with the conference.

I know I’m not finished yet, but so far I can reflect that blogging live from conference makes me pay much more attention to speakers than is my common practice.

This is something we might want to think about in regard to Twittering at a conference.

But it was David Bryson who really caught the blogging atmosphere in his blog post and his slideshow.

…wandering around it was interesting to see how glued or involved folks are when working with a computer the common phrase “Do you mind if I use my computer when you are at a table” which we can interpret as something along the lines of “I don’t want to be rude but I am not going to talk to you but commune with my computer” or words to that effect.

The main reason for this I believe was not that people weren’t blogging before, but it was the first time that we had an RSS feed of all the blogs in one feed. This made it much easier to find blog articles on the conference and as a result the bloggers. It did not mean people were hiding behind their laptops, on the contray it resulted in a more social conference.

Importantly and this is why I think ALT-C 2007 was a sea change (and especially a sea change for me) was that these social relationships continued beyond the conference. We continued to blog, talk and meet well after everyone had flown from Edinburgh and were back home.

There were though two big key differences between 2007 and 2008, one was the Fringe, F-ALT and the other was Twitter. I had used Twitter at ALT-C 2007 and I think I was probably the only person to do so…

F-ALT added a wonderful new dimension to ALT-C by enhancing and enriching the social side of ALT-C and adding a somewhat serious side to conversations in the bar. It allowed people to engage with others in a way that wasn’t really possible at previous ALT-Cs.

It should be noted that it was at a F-ALT event at ALT-C 2008 that I proclaimed Twitter was dead… well what do I know!

Now just to compare at ALT-C 2010 there were 6697 tweets, in 2008 we had just over 300 tweets! There were only about 40-50 people using Twitter. But it was an influential 40-50 people. As it happens most people at ALT-C 2008 were using either Facebook or the then newly provided Crowdvine service.

Like F-ALT, Twitter allowed people to engage in conversations that otherwise may have happened, but more likely wouldn’t have. Both F-ALT and Twitter allowed ALT-C to become more social, more engaging and more interactive.

ALT-C 2009 in Manchester really gave an opportunity for Twitter to shine and this was apparent in that nearly five thousand Tweets were sent during the conference. Twitter was for ALT-C 2009 what blogs were for ALT-C 2007. At the time 633 people on Twitter used the #altc2009 tag, more than ten times the number of people at ALT-C 2008 and more than the number of delegates. Twitter was starting to allow ALT-C to go beyond the university conference venue and engage the wider community. This use of social networking was not just about enhancing the social and community side of ALT-C but also about social learning. The success of the VLE is Dead debate can be placed fairly at the door of social media in engaging delegates through Twitter, blog posts and YouTube videos.

ALT-C 2010 in Nottingham for me was as much about the formal learning as it was about the social learning. An opportunity to learn both in formal and informal social settings. I was concerned slightly that the use of Twitter by certain people and FALT would be slightly cliquey. However no matter how cliquey people think it is, it is a relatively open clique. This year it was very easy to join in conversations using Twitter and then meet up socially, quite a few people I know has never been part of the ALT-C family (first time at the conference) and are now probably part of the clique.

As Dave White said in his invited talk (let’s just call it a keynote) talked about the eventedness of the physical congregation of people at a lecture or a conference. It is more than just what is been presented it is the fact that we are all together physically in the same place. I suspect a fair few of us could recreate that kind of social aspect online and I have seen this at the JISC Online Conferences (another one this autumn) but for many delegates it is way too challenging.

There is something very social about meeting up for something like ALT-C and even in these difficult times I hope we can continue to do so. Here’s to ALT-C 2011.

This is the fifth e-Learning Stuff Podcast, it’s because he’s from Sheffield…

Download the podcast in mp3 format: it’s because he’s from Sheffield…

In this show, James is joined by Nick Jeans, Dave Foord, David Sugden and Lisa Valentine and they start to discuss podcasting, Skype, quality of Skype before moving onto LLW. Apologies for the poor audio quality of Nick which is because he’s from Sheffield (or so Dave says). 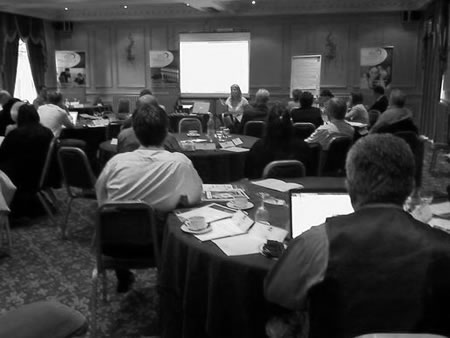