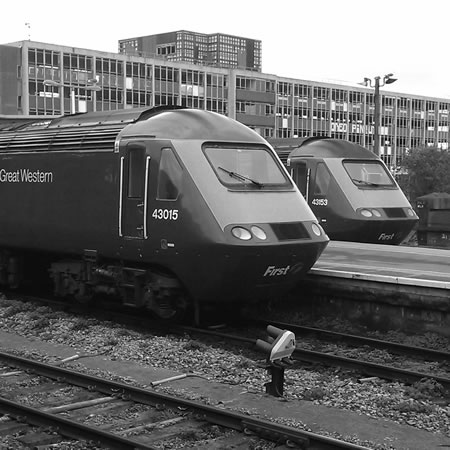 About once or twice a month I find myself on a train travelling to some far flung exotic location, like London, Leeds or Birmingham! Though more often then not it is the First Great Western train to London.

As I travel I like to try and get some work done in the time I have available. One key aspect of my job is communication and for that I need a decent internet connection. First Great Western, unlike some other train operating companies does not provide wifi on their services.  So what is one to do?

I have over the last few years used different ways of getting online on the train, all of them though have involved 3G.

Well recent tests show, as reported by the BBC that:

Mobile broadband speeds are improving but coverage is getting more patchy, suggests a survey.

T-Mobile came out top in the tests because it racked up higher speeds and proved more reliable during the tests.

So how do I use 3G on the train and with what services?

My original way of getting online was with a 3G PC Card from Vodafone, however this went once I changed jobs back in 2006.

I then had an 3G Dongle from Vodafone. This actually worked quite well, some dropped connections, but once within a 3G area, a good speed both up and down. I did notice though that more often then not, I could not get 3G speeds and the connection dropped to GPRS speeds. The main problem with the dongle is that it sticks out and on cramped trains this can be problematic.

After getting a T-Mobile contract phone (with Walk’n’Web Plus) I was able to use the phone as a tethered Bluetooth modem to connect to the internet at 3G speeds. The main disadvantage with this process was the impact that both Bluetooth and 3G had on battery life of the phone. The upside for me was a more reliable and faster connection.

Using a Nokia N95 I was able to use JoikuSpot on the Nokia, this shares the 3G connection over WiFI. This has one key advantage JoikuSpot allows more than one device to connect. A simple idea which just works. Basically it turns my Nokia N95 into a wireless hotspot, allowing me to connect multiple wireless devices to my phone’s 3G internet connection. I start JoikuSpot and once started I can then join the wireless and surf the internet. This was really useful allowing both my laptop and an iPod touch to connect to the internet using the single 3G connection. The Light version only really does internet, it doesn’t allow e-mail or https for example, whereas the Premium version does; this is the reason I upgraded to the Premium version and very pleased I am with it. The main downside is the impact it has on the battery life on the Nokia N95, down to less than four hours, often less!

I used this process for a fair amount of time, made easier when First Great Western introduced power sockets on their trains. Swapping over to the Vodafone 3G dongle if the signal failed or was weak.

I have recently tried a couple of other options, the first was not as successful as I would have hoped and that was the MiFi.

So what’s the MiFi? A battery powered 3G wireless router. Using a 3G SIM it would connect to the internet and then allow  up to five wireless clients to connect and share that 3G connection. With a four hour battery life, could be charged via USB and about the size of a credit card. Using a SIM from a Vodafone 3G USB dongle it was very simple to set up and configure and I would recommend that you use the details from Ross Barkman’s excellent website on connection settings for GPRS/3G to save having to work out where the information is on your providers’ website.

However one of the downsides for me was that though the MiFi worked a treat in stationary location (say at a conference) it was less satisfactory when travelling by train. What seemed to happen was that when the MiFi lost its 3G connection, as does happen on a train, it would switch itself off. As a result you had to check now and again and see if it needed turning back on. This also had an impact on the WiFi connection on my Mac laptop, which even when the MiFi was back on would not re-connect back to the MiFi wireless. In the end the experience was so unsatisfactory that I stopped using the MiFi on trains as a wireless router. The nice thing about the MiFi is that it will work as a USB 3G dongle, so you can use the MiFi in your event and meeting as a wireless router and revert to the dongle mode when on the train.

I have recently switched from the Nokia N95 to the Google Nexus One that runs the Android operating system. There is no JoikuSpot for the Nexus One and I am not 100% on how or even if it is possible to use it as a Bluetooth modem. One thing I have tried is PDAnet that allows me to use the Nexus One as a tethered 3G modem.

One thing I have noticed though is that though my 3G connection from Bristol to London is pretty good, travelling on the Voyager trains from Bristol to Birmingham, the signal is really poor.

I initially thought this was just down to the route, but I have heard that the main issue is the construction of the train and the metallised windows. This basically blocks the 3G signal!

I have used various methods to get online on the train and though each have their disadvantages and advantages, I think I prefer the 3G dongle, though the wifi methods are neater.

3 thoughts on “This is the age of the train…”