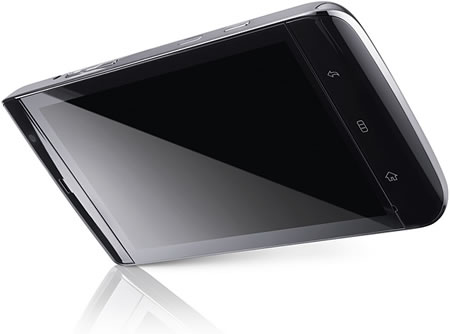 Engagdet has an interesting article on their first impressions of the Dell Mini 5 prototype.

Dell’s puzzled the world for quite some time with its outlandish Mini 5 — at first glance it’s just another Android-based MID, but a quick fiddle with it reveals the full-fledged 3G phone inside.

The MID (Mobile Internet Device) is a form factor that has been tried before, but the MID as a modern concept was announced by Intel in 2007. They are mid way between a smartphone and a fully functional laptop or Tablet PC.

They are designed to provide entertainment, information, location based services, communication and sharing. In this day of social networking, twitter, facebook; they are aimed at individual for personal use rather than corporate use.

This of course doesn’t stop learners using them for learning.

So what of the Dell Mini 5? According to Engadget, the Andorid powered device will include:

WCDMA means that it can use internet on the move (read 3G). At this time, no idea if the Dell Mini 5 will have phone capabilities. Update: As noted in the comments, “Actually, we did report that the Mini 5 does make phone calls, and that the call quality is satisfactory on both ends.”

It also comes with a camera:

The main camera offers five-megapixel pictures of reasonable quality, along with decent 640 x 480 video capture but with slight rolling shutter effect (aka “jelly motion”). The accompanying camera app has a wealth of settings for both modes: scene, white balance, brightness, contrast, and resolution. Extra settings for photo mode include flash, self-timer, multi-shot, shutter sound, GPS location and flicker adjustment, whereas video mode has options for video format (MPEG-4 and H.263).

The device has a on screen keyboard for text entry, though as it has Bluetooth, you probably can use a Bluetooth keyboard for dedicated text entry (as you can do with a Nokia N95).

This device allows for both content consumption and content creation. Two key features of any device that learners use for learning. With WiFi and 3G this means that the learner will have the connectivity to access learning resources on the move or in college (if you have a student wireless network). It will also allow for real-time communication via the VLE or a social networking service of some kind, eg Ning or Twitter.

So will learners actually buy a device like this?

Hmmm, well you can ask the same question of Apple’s iPad that has a lot less capability.

Learners (especially in FE Colleges) have not really bought into devices such as the iPhone; though I am surprised by how many have the N95 and N86. They prefer full size laptops over micro-laptops. Having shown and tried devices such as the Nokia N810 with learners, they thought it was “okay” but preferred other mobile devices and “proper” laptops for serious text entry.

The Dell Mini 5 sounds like an exciting innovative device, however I am not sure if these MID devices will be taken up and used by learners in large numbers.

Would you buy the Dell Mini 5?