AudioBoo – iPhone App of the Week

This is a regular feature of the blog looking at the various iPhone Apps available. Some of the apps will be useful for those involved in learning technologies, others will be useful in improving the way in which you work, whilst a few will be just plain fun! Some will be free, others will cost a little and one or two will be what some will think is quite expensive. Though called iPhone App of the Week, most of these apps will also work on the iPod touch.

This week’s App is AudioBoo.

Audioboo is an application for recording and sharing your voice with the world. This free version allows you to create audio up to 5 minutes in length and post that to your own account on the web. You can add titles, tags, geolocation info and a photo to the recording before you upload it and we’ll save all that with the file. The audio can then be shared with your followers or via Facebook, Twitter & more social networks by managing your account at http://audioboo.fm.

In addition, you can also listen to featured, followed, popular, recent and nearby boos in the app and view photo & location details if attached.

All audio is converted to an mp3. You don’t need to create an account to start recording but it’ll certainly help you keep track of your boos in the future.

This has been one fun app to use on the iPhone. So what is Audioboo? Well it’s a service I first saw demonstrated at the All Together Now event at Channel 4.

To put it simply it is an App on your iPhone that allows you to record an audio recording, add your location, a picture, tags and upload the lot to a website. 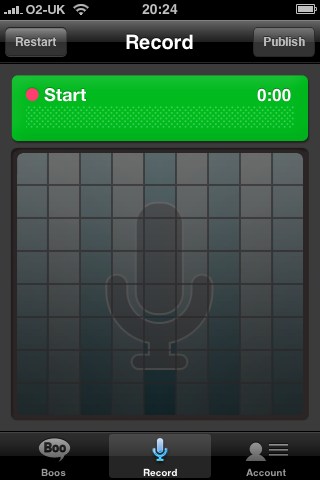 This has some real  potential for learning activities. As you have an account on the website (not essential but recommended) your recordings are kept together and also have an RSS feed as well, which people can subscribe to via iTunes or other podcasting applications.

For example, imagine that your Travel and Tourism students are out on a field trip, they can record an image of each tourist destination, they can record a description,  add relevant tags, the iPhone adds GPS coordinates, and the lot is uploaded to the web. Back at college they can create a media rich presentation using the recordings and images and create a map using the geo-data.

It also acts as a simple mp3 recorder, and these mp3 files are then available to download from the Audioboo website.

I have mainly used Audioboo to show people what Audioboo can do. I hope to in 2010 use Audioboo to do a regular short podcast.

I do like Audioboo, it is such a simple concept, but executed really nicely and has the potential to be a very effective tool for learning.

4 thoughts on “AudioBoo – iPhone App of the Week”