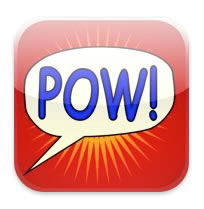 I am hoping that this will be a regular feature of the blog looking at the various iPhone Apps available. Some of the apps will be useful for those involved in learning technologies, others will be useful in improving the way in which you work, whilst a few will be just plain fun! Some will be free, others will cost a little and one or two will be what some will think is quite expensive. Though called iPhone App of the Week, most of these apps will also work on the iPod touch.

This week’s App is Strip Designer.

With Strip Designer you can create your own personal comic strip. Add your own photos, apply simple image filters to increase their impact, and add speech balloons and text-boxes. When you are done, save the resulting image to the iPhone’s photo album and email it to friends and family.

Comics can be used in many different ways to enhance and enrich learning activites, as well as other processes in the college. Think of it as just another medium to get a message across to learners.

There are various comic creation apps for the iPhone, where Strip Designer is different is that it allows you to create a comic strip. Most of the other applications allow you to add comic touches to a single photograph, Strip Designer allows you to use a series of photographs, comicfy them, add captions, speech balloons and then save it as an image, send via e-mail or send direct to Facebook or Flickr.

The interface is quite complicated with various menus and sub menus.

However it doesn’t take long to see that the reason for this is the variety of effects and adjustments you can make to the images, text, balloons and captions. 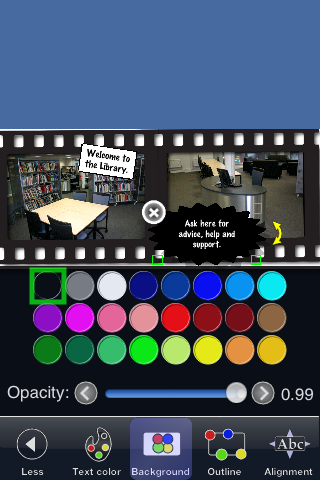 This is a finished strip. Click the image to see the full size version.

Overall the app works very well, but as with any comic app, the key is the thought and planning that goes into the comic design process and writing before you even open the app. That is something to consider if you want your learners to create a comic as part of a learning activity.

2 thoughts on “Strip Designer – iPhone App of the Week”