Many people see the iPad as a BIG iPod touch, something that is used to view content on. Though it does have a microphone, unlike the iPhone is does not have a camera.

There is though one aspect of the iPad that Apple have announced that I think some people have missed and that will be the availability of iPad versions of the iWork applications. Apple will at the same time as they release the iPad, release iPad versions of their presentation software, Keynote, wordprocessing software, Pages and spreadsheet software, Numbers.

There are also rumours that Microsoft may be working on a version of Office for the iPad.

So what does this all mean?

Well is turns the iPad from a mainly content consumption device to a device that can allow the user to both consume and create content.

So what you may say, I have a laptop that does just that!

Well it’s pretty certain that the iPad is no laptop, even Steve Jobs in his iPad announcement says that the iPad sits between the iPhone and a laptop.

However I don’t see the iPad replacing my laptop all the time, but in some circumstances I can see it replacing it some of the time.

For example in meetings, the iPad is going to be more useful than a laptop for checking information, using Pages to make notes, etc… 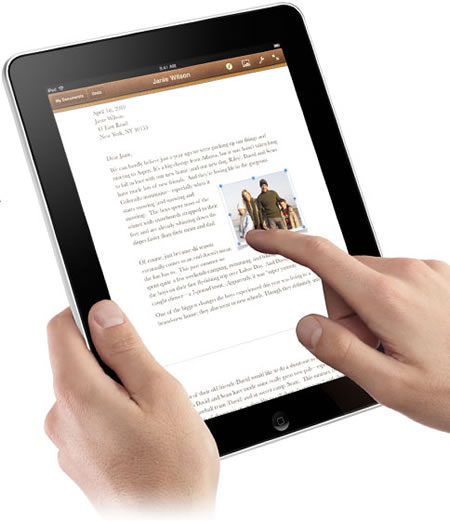 Likewise in conferences (where there are in some sessions no tables), the iPad (with the long battery life) will make it easier to engage in the back channel, makes notes, check URLs, share thoughts and impressions, and all the other conference stuff that at the moment most people do with a notepad and a pencil.

For learners an iPad may be a better device to bring to lessons, with easy access to e-books (and these may be getting more engaging and interactive), internet access, web tools; the ability to also create notes using Pages, or enter notes using tools like Evernote more easily than on an iPod touch or iPhone, I can certainly see many learners preferring the lightweight feel of the iPad, over a heavier laptop. Then again they might want to buy a netbook!

I don’t use spreadsheets much so I don’t see much of a use for Numbers. However I do give a lot of presentations and having Keynote on the iPad makes a lot of sense to me. 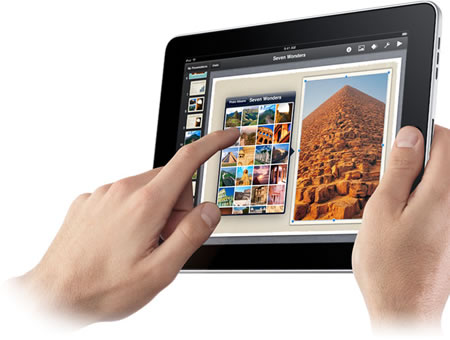 I’ve always thought that Apple should have made a Keynote Presentation App for the iPhone; you would create your presentation on the Mac, sync to the iPhone and then on the iPhone would be a little App that allowed you to both view the App on the iPhone screen, or using the AV cable you can get, show the presentation through a projector or TV. One of the issues though with that is Apps can’t use the AV cable! I guess an Apple App could, but maybe not.

If Keynote on the iPad can use the AV Cable and hopefully then other applications will also be able to use the AV out.

Of course the Keynote App for the iPad allows you to create presentations, and I really do like using Keynote as my primary presentation tool.

Overall I think Keynote and Pages for the iPad, have turned the iPad into for me from a “maybe” purchase to a “more than likely” purchase.

Apple announced iPhone 3G yesterday in a keynote by Steve Jobs at the WWDC in San Francisco. It will be available in the UK on the 11th July.

Other new features are:

I wonder if the Keynote (iWork) and PowerPoint support also allows you to show the presentation via an AV cable in the same way you can do at the moment with video and images.

It will be interesting to see also if iWork (or even Office) support includes editing and creating support, or is it just going to be reading, I suspect the latter.

Of course there are also all the features announced when the iPhone SDK was released earlier this year which include:

I do like the fact that an educational institution can put apps on the iPhone (or the iPod touch) without needing to go through the Apple checking process and the iTunes App store.

Downside is that you now need to activate the phone in store, so now unlocking just became a lot more expensive as you will have to buy into a phone plan as well as the phone.

If you are creating a presentation then generally most people use PowerPoint. Personally I now create virtually all my presentations using Apple’s Keynote. One of the many reasons I like Keynote is the way it handles images, audio and video compared to PowerPoint.

In version 4.0 of Keynote (part of iWork ’08) you can now send your presentation direct to YouTube.

This avoids the need to export the file and then upload to YouTube, you can upload direct to YouTube quickly and easily.

I’ve not yet tried it, but I can see after attending a conference I could upload my presentation and then embed it into my blog or the organisers could embed into their website. It also avoids the problems that you can have with Keynote files as not everyone has Keynote and even if you export as PowerPoint, not everyone has PowerPoint.

Keynote – a superb presentation package, not matter how many times I start creating a presentation in PowerPoint, I virtually always end up in Keynote. The latest version (iWork ’08) is a real improvement on the previous version and I will admit I do like the audience going “ooh” when I use the cube transition.

Toast – not only a superb disk burning piece of software, but extremely capable of converting a range of video file formats and doing it well. Another useful video conversion tool I have started using is VisualHub.

EyeTV – though Windows Media Centre (and now Vista) has a much better interface, the versatility, the editing and exporting functionality make EyeTV the only real choice when it comes to recording and editing television. Combined with Toast and VisualHub you suddenly can record, edit and watch that video wherever, whenever and on whatever you want.

Dreamweaver – steep learning curve, but if you need to get your hands dirty with HTML and websites then this package is perfect. Though I do like Dreamweaver, I know with web tools such as WordPress and Drupal tools such as Dreamweaver are becoming less essential than they were in the past.

Fireworks – For manipulating images for the web then I go with Fireworks every time. Can also be used to create simple animated gifs. I do use PhotoShop, but for web image editing I always start Fireworks first.

Firefox (with Safari a close second and Flock in third place) – I can’t work with non-tabbed browsers, so on the PC it’s Firefox all the time, on the Mac I mainly use Safari. Safari with it’s .mac integration allows me to share my bookmarks over multiple computers and over the web. Now Safari (in beta) is available for Window and I like how Safari for Windows looks almost exactly like Safari for the Mac. Flock is for me relatively new and I do like the integration with online tools such as Flickr, del.icio.us and WordPress.