A short tour of a virtual construction site and some of the 3D objects available for in-depth study.

I think this is an useful addition to learners studying construction. It doesn’t replace being on a physical building site, but does support learning in an engaging and innovative way.

Hollywood believes that 3D is one way in which it can overcome piracy and get us back into the cinema. Personally I think it is a bit of a gimmick and puts pressure on film makers to focus on 3D effects rather than good film making, story and plot. I did go to the cinema to see Toy Story 3 in 3D and I didn’t think the 3D effects added anything special to the film, when we recently re-watched the film on DVD on our 2D TV, the film was still just as good and I didn’t miss the 3D whatsoever. I remember going to the cinema to see Jaws 3-D and that was a film which was made purely to use 3D as a gimmick to get people to go and watch what was a terrible film. It must have done okay in the cinema though, as they did make a Jaws 4 (though that was not in 3D).

in April as well as the Bloggie HD Pocket Camcorder

which will be much cheaper.

This has some potential for learning activities allowing learners to take images in three dimensions for reviewing later at a time and place to suit the learner, but only if that learner has access to a 3D TV. Now it has to be said that you can buy 3D TVs, but I doubt they are mainstream enough so that most learners in a cohort have access to one. Would you put a 3D TV into college? Well if you were taking a lot of 3D footage then maybe?

However I come back to the question, what is the point of 3D, what does it add to the value of the learning experience that standard 2D video footage doesn’t?

Video in itself has so much to offer learning compared to still images or diagrams. To see the video of a technique of filleting fish for example.

This is so much better than the line diagrams you use to have to use.

Now I do wonder what 3D would add to the experience? Would the experience be better? It might be, but really would it be that much better?

Now as I write this, I do wonder if I am one of those sceptics and luddites about new technologies? Is 3D just a gimmick as I think it is, or is it that I have a blinkered approach to new technologies? What pedagogical or learning problems does 3D solve?

So is 3D the next big thing? Or is it just a gimmick? Are you using 3D already?

Do you have a GPS or satnav and still get lost?

Could it be because the maps on satnavs look like maps rather than the place where you actually are?

Though I think GPS devices have a place in learning and especially mobile learning they do have a requirement that the learners understand maps and the concept of maps and am not sure that all do.

In Korea we are seeing the future of satnav with the map been replaced by a 3D view of the road you are on. 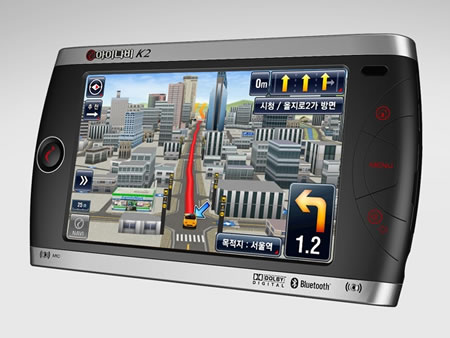 Thinkware announced the launch of its premium navigation device ‘iNAVI K2’ in Korea market, which is equipped with its dynamic electronic map of 3D space representation ‘iNAVI 3D’.

Of course with initiatives like Google Street View in the US, eventually we may see (in the UK) photo-realistic 3D environments on satnav devices.

This all means for learners that they will find using GPS devices much easier to use for location based learning activities.