Apple have announced their Fall (or Autumn) line up of iPods for the holiday season. In what is becoming a traditional annual announcement, Apple showed is their new iPod shuffle that looks like a second gen model (it has buttons), a new square iPod nano that has got smaller, lost the camera and video playback of the previous version and a new iPod touch that now has many of the features of the iPhone 4G. 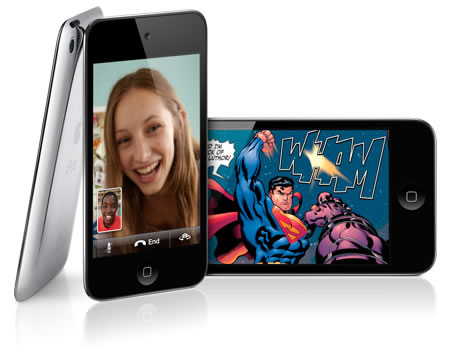 The new iPod touch probably has the biggest interest for education users and as it now comes with a camera as well as a much nicer display will be much more useful for various educational activities. Moving from the iPod touch to an iPhone eighteen months ago I was totally impressed with the impact having a camera had, though the iPhone 3G camera was pretty weak as cameras go, it allowed me to do so much more than just having the older iPod touch. The cameras on the 3GS and 4G iPhones are even better and are great for shooting video or taking images. I am looking forward to using the new HDR feature on the iOs 4.1 upgrade available next week. However the new camera on the new iPod touch is not in the same league as the iPhone 4G camera or even the original iPhone 3G camera! It will be okay for shooting video and taking low quality stills. However this is probably going to be okay for most education users. You can always use a proper digital camera for taking photographs, the iPod touch is so much more than just a camera.

iOS 4.1 does make the iPod touch more than just a camera or a media player, with all the apps available, wifi and the web at a touch of the button, there is so much about the iPod touch that makes it idea for enhancing and enriching the learning experience. For some learners this will be their “main” computer.

The key really is will learners be buying this device? Probably.