The Early Edition – iPad App of the Week 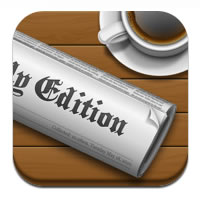 This is a regular feature of the blog looking at the various iPhone and iPad Apps available. Some of the apps will be useful for those involved in learning technologies, others will be useful in improving the way in which you work, whilst a few will be just plain fun! Some will be free, others will cost a little and one or two will be what some will think is quite expensive. Though called iPhone App of the Week, most of these apps will work on the iPod touch or the iPad, some will be iPad only apps.

This week’s App is The Early Edition.

Finally – your own personal, daily newspaper! The Early Edition takes all of the news sources that you enjoy and presents their content in a format which is familiar, stylish and intuitive.

One of the useful things that both the iPhone and iPad allow you to do is with certain Apps, aggregate RSS feeds and bring the news right to your device. Saves you having to visit the different websites and or news services.

In this series I have mentioned NewsRack that I use as my main RSS reader, in the main as it syncs with Google Reader allowing me to read the news either on the iPad, on the iPhone or on the web, without having to re-read stories I have already read.

So why did I buy The Early Edition?

Well apart from my making my blog look nice…

Actually there is a simpler reason, The Early Edition is a really nice way to find and read news stories. The way I use it is to access sites that I browse now and again on diverse subjects.

Another way to look at this is I use NewsRack as my daily newspaper, whilst The Early Edition is my Sunday paper.

The Early Edition allows you to import RSS feeds from various sources, including if you want from Google Reader. However unlike NewsRack it doesn’t sync back to Google Reader. Another reason is that RSS readers if they have lots of feeds can be slow. Sometimes I just want the important news not the fluff!

There are quite a few RSS readers on the App store for the iPad, like Reeder and Pulse. Not sure how many RSS news readers I need, but at the moment two are sufficient for me.

Get The Early Edition in the iTunes App Store.