I do enjoy Handheld Learning and 2009 was no exception. Three days of mobile learning stuff, presentations, discussions, networking and people.

Day two, Tuesday, sees a slightly different and more traditional feel to the conference. We have opening keynotes, parallel sessions and free coffee!

With a 9.30 start I arrived an hour early, time to have a look around the exhibition hall and see what is new and exciting. It was very apparent how the credit crunch is impacting on the mobile learning business with what looked like a 30% drop in exhibitors compared to 2008. It was nice though to see the LSN there with their stand as they have through the MoLeNET programme made a major contribution to mobile learning in the FE sector and it would be interesting to see what both the schools and HE sector thought of the work.

Graham Brown Martin as usual opened the event, and unlike other conference organisers takes the opportunity to discuss and reflect on the issues of the day. 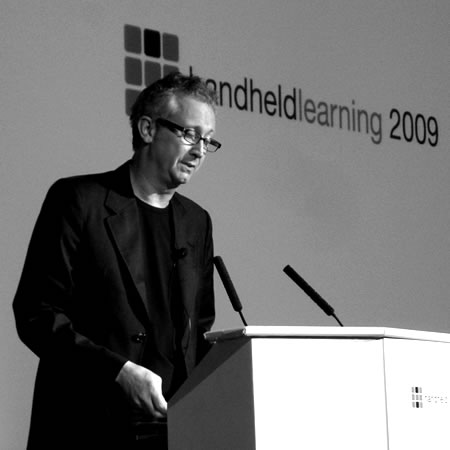 He certainly did not hold back and told the audience what he thought and what the government of the day should be doing to support and improve education. I got the impression from Twitter and from the (physical) audience that they agreed with him. It was time for change and that change is now, it’s not just up to us (the audience) anymore; government, departments need to make that change.

Up next was Zenna Atkins who was talking in a personal capacity and not as head of Ofsted. She was quite clear about this and actually I think as a result we had a more personal view of education. She felt she had been failed by the formal education system and despite this had a made a success of her life. She recounted tales about her children and their experiences in the education system. I am sure she knows more about the UK education system then someone like me, but you have to ask this question, if the education system is so wrong in the UK, despite the best efforts of organisations like Ofsted which are there to check the quality of the education system, then maybe we need to rethink the whole education system and the quality checking that takes place. I did feel that alienating your audience who are generally all from the formal education system and indicating that they are the problem was an interesting way to present the issues. You have to ask what is the point of a keynote though? Is it there to echo the feelings of the audience or is it to make them stop, think and reflect on their practice? If a keynote makes you think and even if you disagree with the thoughts, is that not better than one that makes you just nod your head in agreement.

With Malcolm McLaren up next it was certainly going to be an interesting keynote and he isn’t someone who has by his own admission not done much handheld learning. I felt he rambled on a bit (and over his alloted time) and didn’t really make me sit up and think as Zenna had done. I didn’t really see the point of him recounting his wine tasting days as that interesting, even if it was sometimes amusing. He was also failed by the formal education system but found success, notice a pattern here? Malcolm certainly polarised the audience and on Twitter half seemed to see him as a rambling old man and the other half were entranced by his life and stories.

Yvonne Roberts was the third keynote and having alienated the audience with a throwaway remark about dyslexia once more recounted how the formal education system had failed her and here she was speaking as a keynote presenter.

It was about now that I realised very little had been said about handheld learning. Many of the speakers were talking about how the formal education system was rubbish and needed a revolution; did they forget who their audience was and what they were doing? Most of the audience (like me) work in formal education, we are doing innovative stuff to enhance and enrich learning, we are changing systems and structures, we are meeting the needs of learners, we are personalising and differentiating the learning experience, we are using technologies to make things better and not just because it is shiny. There are issues and problems with the formal education system, however those issues are institutional, cultural, societal and governmental. Changes need to be made at all levels, in government, in government departments, officiating quangos such as Ofsted, examining boards, local authorities, funding bodies as well as schools and colleges.

I almost felt sorry for James Paul Gee, who hadn’t been failed by the formal education system and had some interesting things to say.

Maybe Graham’s plan was to make us think and reflect, if that was the case he certainly has succeeded in my case. Of course if we had read the programme we would have read that the session was called “Reflections on Learning” and it did what it said on the tin.

Lunch was ninety minutes long which gave plenty of time for networking, talking and sharing.

As with all conferences which run parallel sessions I had wanted to go to the Conference Session Two – “Creativity & Innovation” however due to timing issues and wanting to hear Ollie Bray I went to the Social Media for Learning. I also was interested in the Gaming stream. I enjoyed Ollie’s session which looked at using social media in schools. 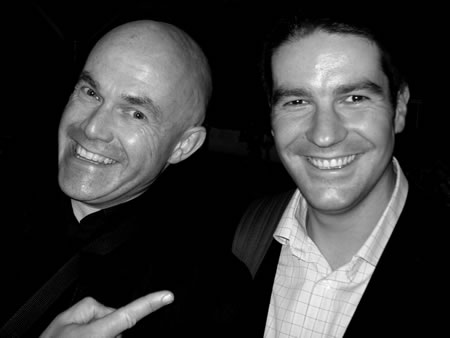 My own Twitter session seemed to go down well and was very full.

Overall a full and enjoyable day with way too much going on. Hoping to catch some of what I missed once videos of those sessions hit the Handheld Learning website.