Digg has been the social bookmarking site over the last few years (much more so than in my opinion the more useful delicious). Digg has always been a popular site, however in the last year Twitter has shot ahead of Digg in terms of users.

Twitter, the mobile phone-based micro-blogging service, rocketed nearly 1000% in use in the UK over the past year according to industry analysts HitWise.

For the first time, the site has seen more visits than “social bookmarking” site Digg, which allows users to share links to sites.

From my perspective as a long term user of Twitter, I joined Twitter in March 2007, I have seen the number of people I know start using Twitter grow and grow.

I am now part of a large community of e-learning people who use Twitter and as a result find it a useful tool and a interesting place to visit.

Reading documents on personlisation in preparation for a meeting on Wednesday. 6:58 PM Mar 26th, 2007 from web

What percentage of your students actively use the college VLE? 3:41 PM Mar 26th, 2007 from web

Now downloading a publication that Andy Black posted to the champs list: http://www.becta.org.uk/res… 9:56 AM Mar 26th, 2007 from web

Thinking about how I can an audio track to my bidding presentation I gave to the RSC SW last week. 9:55 AM Mar 26th, 2007 from web

Now my typical Twitter responses are in reply and in conversation with others.

In Gloucester, one meeting today, which is in five minutes. about 4 hours ago from web

Probably going to run an unconference on mobile learning later this year. about 22 hours ago from web

Coming towards the end of the m-Champions event. about 22 hours ago from web

@MikeNolan I vote for Vodafone. 11:20 AM yesterday from web in reply to MikeNolan

@cristinacost I think I would rather go without internet then have to go to McDs @GrahamAttwell hopefully you can find a coffee shop w/wifi 11:16 AM yesterday from web in reply to cristinacost

As a result twitter is proving to be a much more valuable tool for me in sharing practice, finding out stuff and creating and developing relationships than it was when I first started using it nearly two years ago now.

It is now very easy to access Twitter via mobile devices (despite the lack of SMS support in the UK) and I will often use Twitterfon on my iPod touch.

I have written about Twitter before notably why I think Twitter is an important tool and that the informal chat side is as equally as important as the formal chat. A few people have “complained” about irrelevant tweets and I am aware of some who have stopped following others because of their so called shallow and lightweight tweets. These people in my opinion are missing the point about the real value of Twitter. I am sure that they get something from Twitter, but you have to ask the question is Twitter about following people and reading informative Tweets or is it about communication and community?

I use Twitter in various ways, as well as informing my community that I am drinking a coffee, I also let them know about various (what I think are) interesting things I am doing.  I tweet about blog posts I have made. I also use Twitter as a backchannel at events and conferences, finding out what is going on and what I find interesting.

However telling people is only half the story, maybe even as  little as 20% of the  story. The other key thing about Twitter is about communication, responding to other tweets, having a conversation. Responding to what others have written, or acting on what others have written. This was not how I used Twitter when I started (as you can see above) but is now a core reason why I use Twitter now.

I should say, for me in addition to the good stuff, Twitter is about the irrelevance, it is about the non-useful stuff. If all you ever post is what blog entries you have written, why would I follow you on Twitter, I might as well subscribe to your blog’s  RSS feed.

One important thing for me to say is that for me Twitter is all about the coffee.

It’s the coffee you drink with colleagues during a break from work, where you discuss work stuff, but also discuss your commute into work, what you saw on TV last night, what bizarre thing you just saw, the weather.

It’s the coffee you drink whilst browsing the web and when you find an interesting web  site and you post the link to your blog, in an e-mail, on your VLE.

It’s the coffee you drink in a coffee shop, where you’re reading the paper, reading a book, chatting.

It’s the coffee you drink in the Library reading a journal, a book, writing stuff.

It’s the coffee you drink with fellow delegates during a break or at lunch at a conference. Where you discuss the keynotes, the presentations, the workshops, where you are going next, your hotel, the food, the coffee, what you do, where you’re going, what gadgets you have in your gadget bag.

At the end of the day Twitter is all about the coffee. 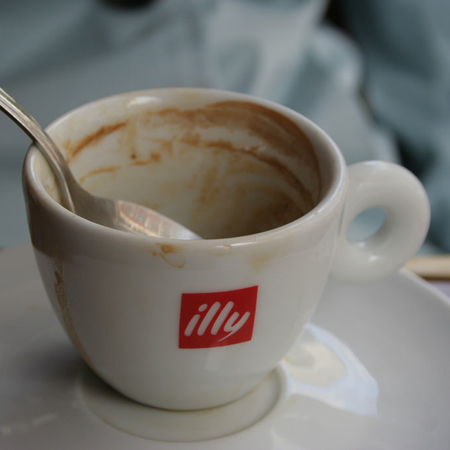 So when did I first Twitter about coffee, you did have to ask, the first time was the day after I started using Twitter.